< Back to Youth Stories

Alesha*, 9, is an empathetic and thoughtful 4th grader whose goofy nature brings joy to everyone around her. When her professional mentor, Toni, first met her two and a half years ago, Toni noticed that Alesha was very shy and unsure of herself. Her grandmother hoped that enrolling Alesha in Friends of the Children-Seattle would help her gain self-confidence.

Toni and Alesha started out by building trust in one another. After a few months of consistency, shared experiences, and many get-to-know-you games and conversations, Alesha began to open up and be herself around Toni. Together, they identified a goal that Alesha wanted to achieve: building friendships with peers in her new school and neighborhood.

Because of the moves and transitions Alesha had experienced previously, she never had an opportunity to make strong friendships with her classmates or neighbors. “Being new to a community was understandably overwhelming and unfamiliar for her,” Toni said. “She wanted to make good choices in finding friends that cared for her and improved, rather than hindered, her mental health, wellbeing, and life.”

Friends of the Children has nine research-based Core Assets. These are specific qualities our professional mentors focus on to ensure the social and emotional development of our youth. Building on two of the nine Core Assets that Toni incorporated into their outings together, Growth Mindset and Positive Relationship Building, Alesha challenged herself to talk and play with her peers more frequently at lunch and recess. She kept an open mind and tried new activities that gave her even more opportunities to make new friends. Outside of school, Toni planned outings intentionally to support Alesha in reaching her goal. She invited more of her youth to join fun, structured activities so Alesha could build connections with peers in a safe space.

While on outings together, Toni and Alesha regularly check in on Alesha’s goals. “I believe that these opportunities help her to reflect on her goals and how far she has come,” said Toni. Through this experience, Alesha has learned to think about what she looks for in a friend and to try to be that kind of friend to others. Most of all, she has learned how important it is to be herself and know that is enough. “I have loved watching Alesha grow in her self-confidence and love for herself,” Toni reflected. “She is such an incredible person and I’m so glad she is able to see that in herself more.”

*Name changed to protect youth's privacy. Toni and Alesha are not in the photo. 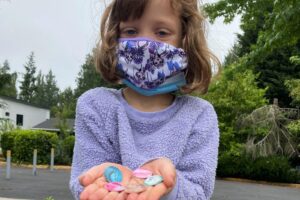 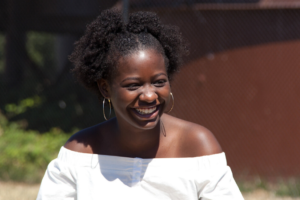 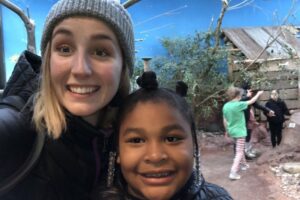 Marie and her mentor, Hailey, bond over sisterhood